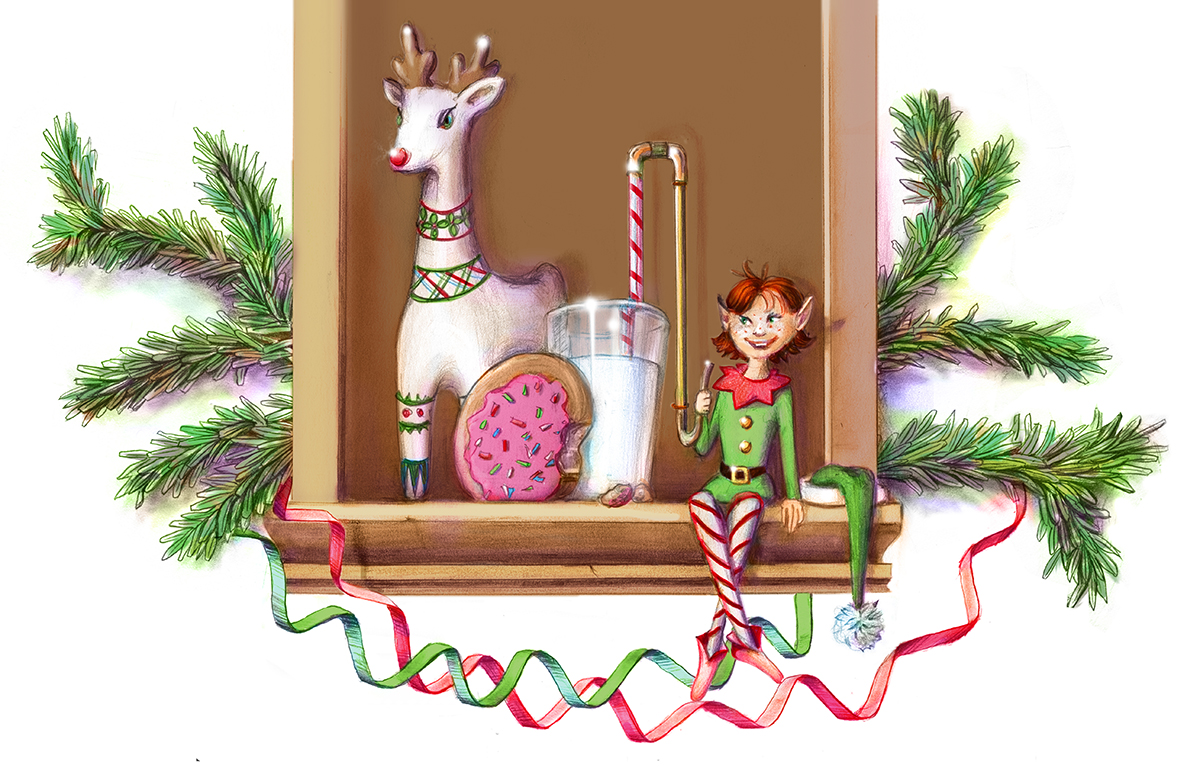 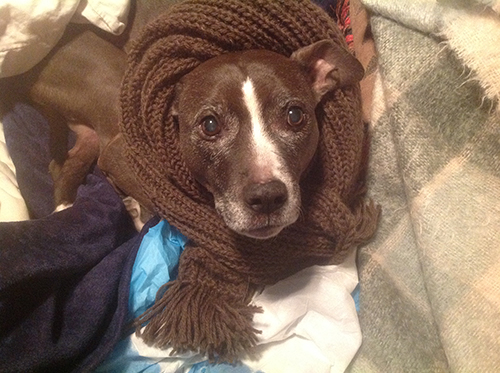 Here are the drawings I made while traveling Scotland this October. I posted them in chronological order, based on when I visited the castles. Make sure to click on links in the castles' descriptions - those will lead you to 3D Google maps view so you can see what the castle looks like in real life.

The sketches are reduced in size for this post - right click and open in new tab to see original sizes.

WIKI: Glasgow Cathedral, or St Mungo's Cathedral, was originally built in the 1100s, and substantially enlarged in the 1200s. It survived the Protestant Reformation of 1560 almost intact and stands today as the most complete medieval cathedral on the Scottish mainland.

I went to the cathedral twice - first day I got there late and just walked outside the cathedral, sketching and taking photos. Next morning I actually got in - there are the most amazing stained glass windows in the cathedral! 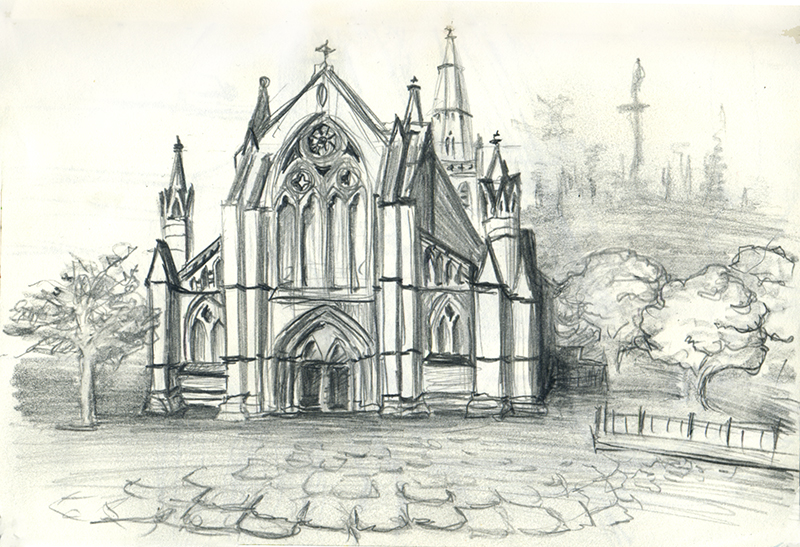 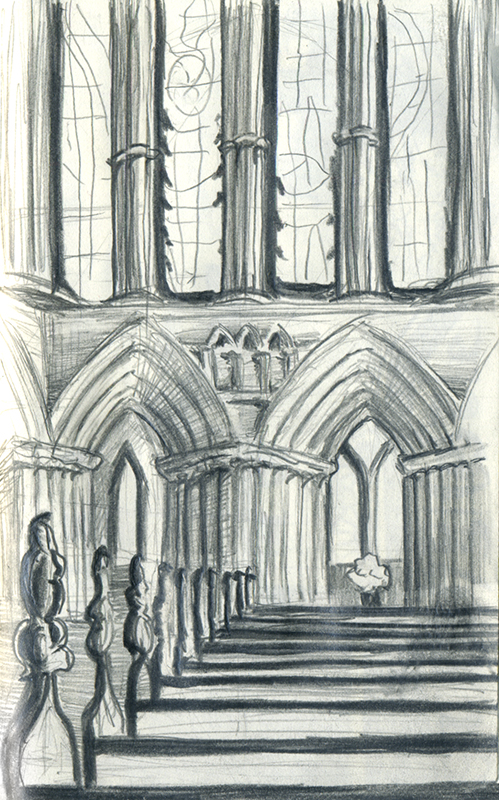 WIKI: Stirling Castle is one of Scotland's largest and most important castles. The first record of Stirling Castle dates from around 1110, when King Alexander I dedicated a chapel here. Several Scottish Kings and Queens have been crowned at Stirling, including Mary, Queen of Scots, in 1542.

You hear about Mary, Queen of Scots, almost at any place you visit in Scotland. When I came to castles where she has not been, it almost felt strange - why did she miss that one? :) Reminded me of the passage from the Three Men in a Boat: "...it was round about the grounds of this old priory that Henry VIII is said to have waited for and met Anne Boleyn. He also used to meet her at Hever Castle in Kent, and also somewhere near St. Albans. It must have been difficult for the people of England in those days to have found a spot where these thoughtless young folk were not spooning." 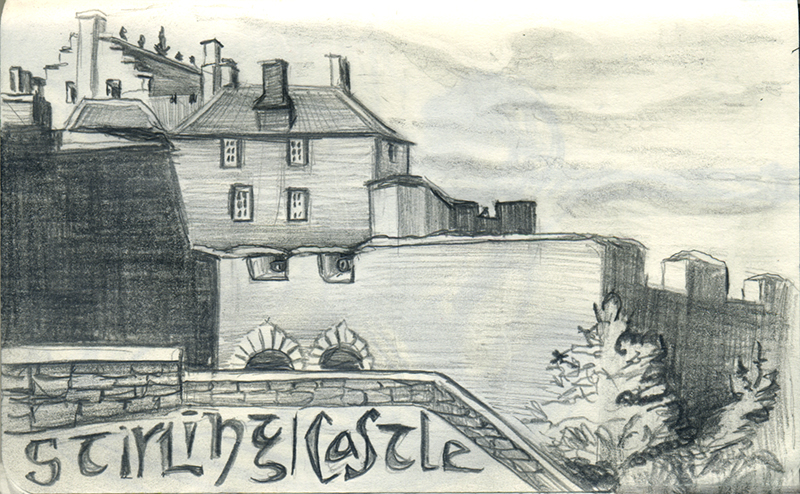 WIKI: Edinburgh Castle dominates the skyline of Edinburgh from its position on the Castle Rock. Archaeologists have established human occupation of the rock since at least 2nd century AD. There has been a royal castle on the rock since at least the reign of David I in the 12th century, and the site continued to be a royal residence until the Union of the Crowns in 1603. From the 15th century the castle's residential role declined, and by the 17th century it was principally used as military barracks with a large garrison.

I loved Edinburgh! A great city to walk around, feel the history... I loved the narrow staircases connecting parallel streets - very unique (and great exercise, too :) Bars are great, too - Scotland has some great beers! Check out Brew Dog - they export to the US and are planning to open their first US brewery in Ohio some time next year. Unfortunately, I don't drink whiskey - which of course is distilled all over Scotland. 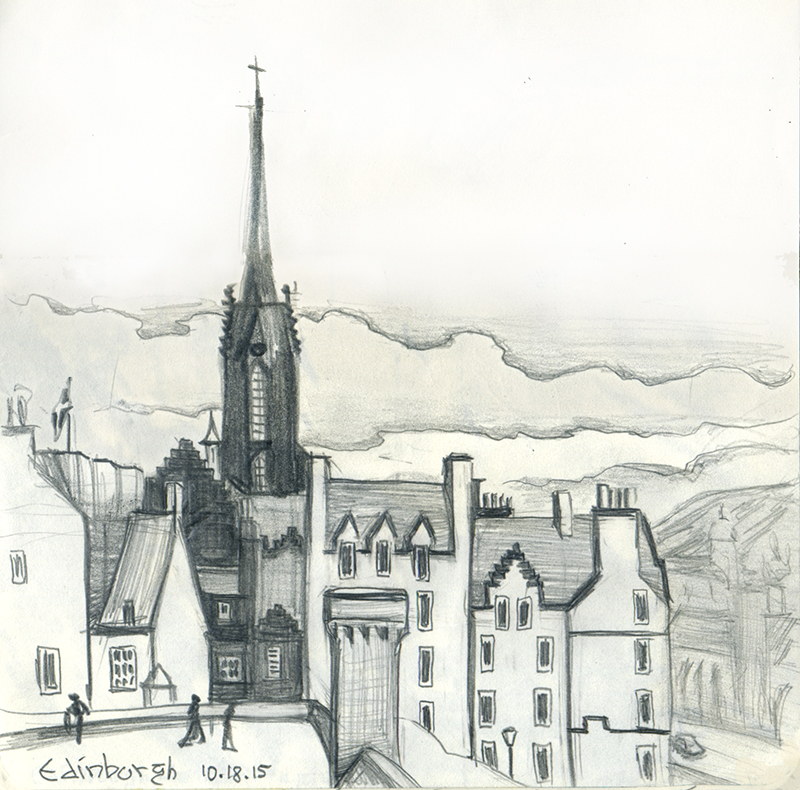 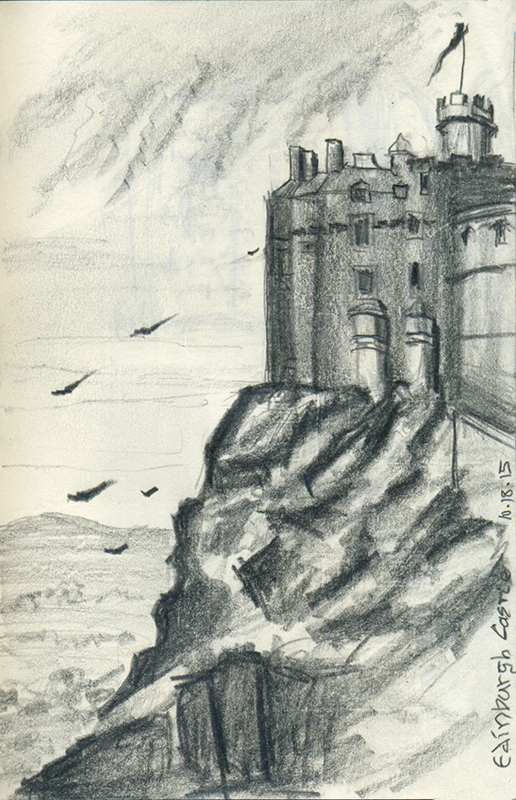 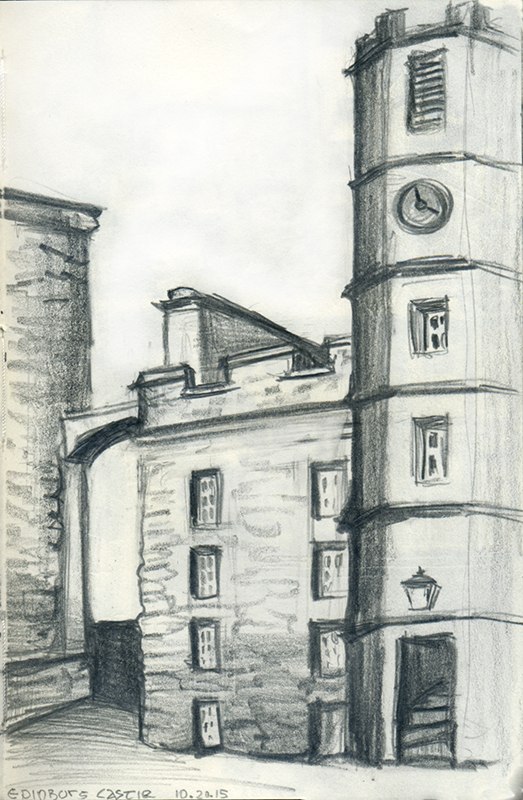 WIKI: Holyrood Abbey is a ruined abbey of the Canons Regular in Edinburgh, Scotland. The abbey was founded in 1128 by King David I. During the 15th century, the abbey guesthouse was developed into a royal residence, and after the Scottish Reformation the Palace of Holyroodhouse was expanded further.

The Palace of Holyroodhouse is a great place to visit, but, unfortunately, you cannot take photos inside. The ruins of the abbey are just outside the palace and are a very beautiful and quiet place to sit down and draw. A lady who works in the museum came up to me saying that she loved to see someone draw instead to taking pictures! :) WIKI: Glamis Castle is the home of the Earl and Countess of Strathmore and Kinghorne. The Castle has been the home of the Lyon family since the 14th century, though the present building dates largely from the 17th century. Glamis was the childhood home of Queen Elizabeth The Queen Mother, wife of King George VI. Their second daughter, Princess Margaret, Countess of Snowdon, was born there.

The castle is beautiful and I got the most wonderful tour of the castle with a couple from Singapore. They were asking the guide the most interesting questions and it was a pleasure to be in their company. The castle itself is beautiful, but the most amazing is to see the glimpses of the royal life there :) Just like we have family photos on the shelves and counters at home, they also do - photos of princes and princesses and the Queen mother. Oh, and there were two bear skins in the castle gifted by a Russian ambassador :)

Another interesting thing in the castle is the Duncan Hall, where, according to tradition, Macbeth slain King Duncan. King Duncan was a real historical figure, but alas, he lived about 3 centuries before Glamis was built :) 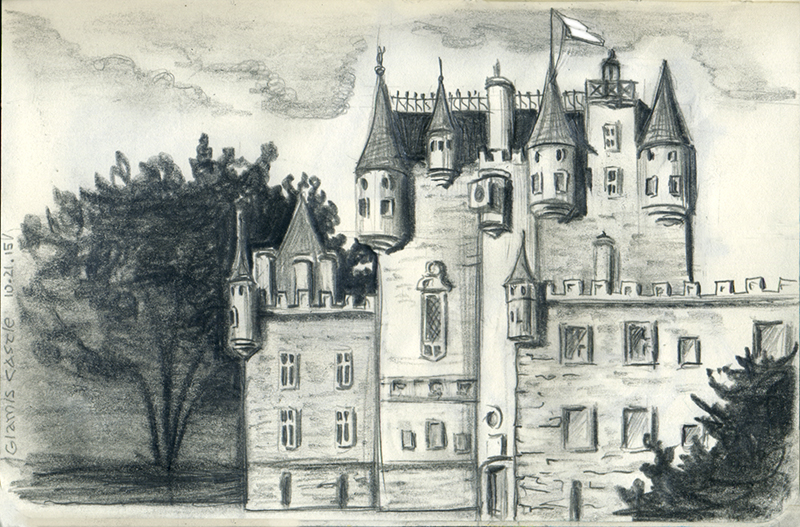 WIKI: Dunnottar Castle is best known as the place where the Honours of Scotland, the Scottish crown jewels, were hidden from Oliver Cromwell's invading army in the 17th century.

When I thought about Scotland, I imagined something like Dunnottar - a ruined castle on top of a cliff with great views of land and water. And Dunnottar was everything I imagined! It was brutally cold and windy that day, though, - the castle staff even thought they might close it due to high winds. But luckily they did not and I was able to take lots of photos and sketch, too; although I was afraid I'd get blown off the cliff into the North Sea! 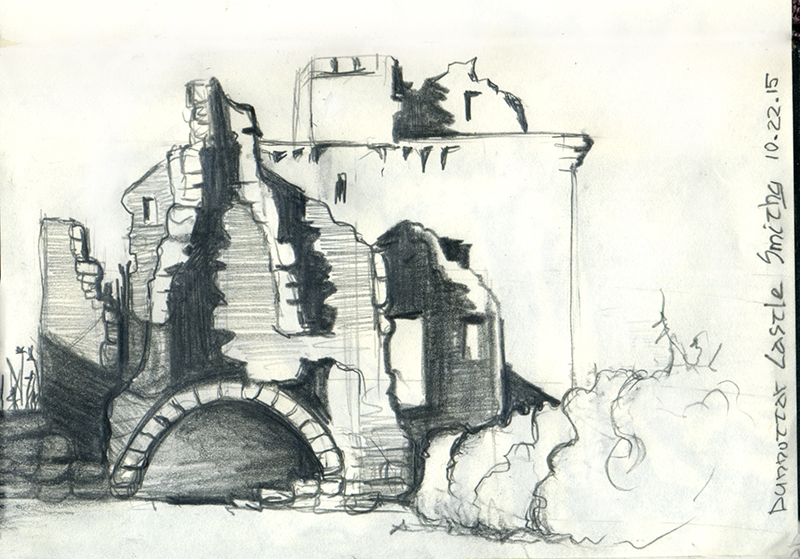 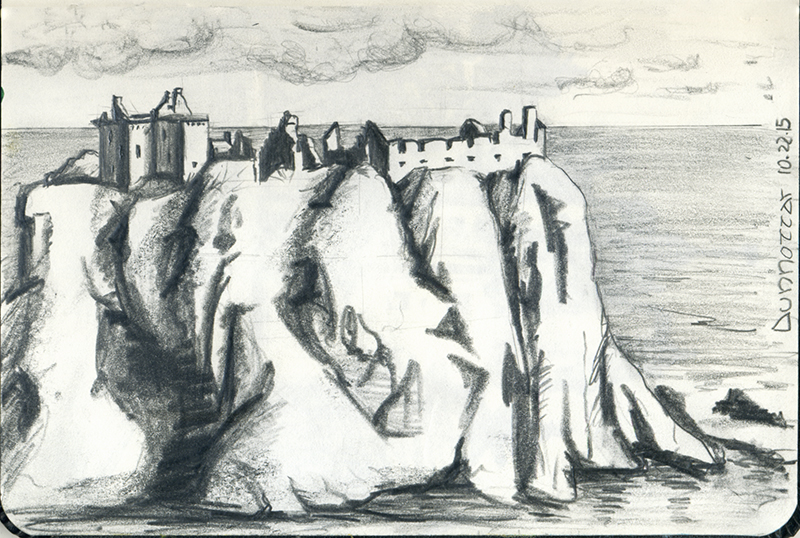 WIKI: Craigievar Castle was the seat of Clan Sempill and the Forbes family resided here for 350 years until 1963, when the property was given to the National Trust for Scotland. The setting is among scenic rolling foothills of the Grampian Mountains. The contrast of its massive lower storey structure to the finely sculpted multiple turrets, gargoyles and high corbelling work create a classic fairytale appearance.

Unfortunately, the castle was closed for winter, but the grounds around the castle were open and I was able to get in and draw. 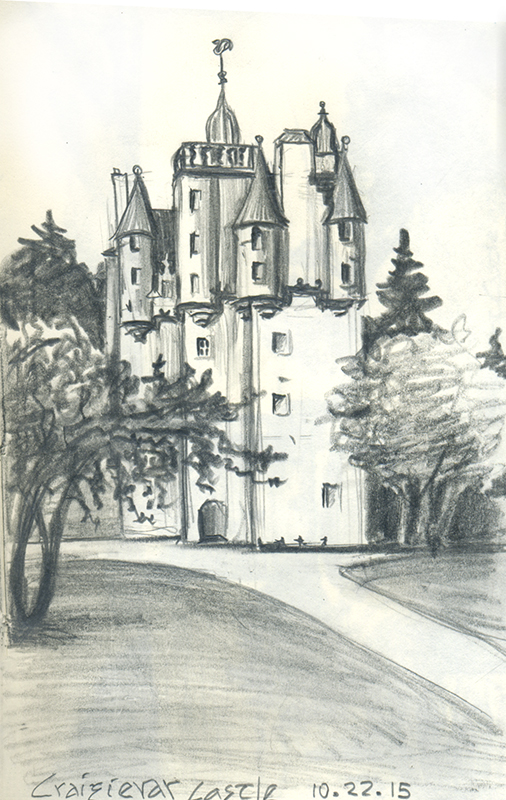 WIKI: Urquhart Castle sits beside Loch Ness in the Highlands of Scotland. The present ruins date from the 13th to the 16th centuries, though built on the site of an early medieval fortification. Founded in the 13th century, Urquhart played a role in the Wars of Scottish Independence in the 14th century. It was subsequently held as a royal castle, and was raided on several occasions by the MacDonald Earls of Ross. The castle was granted to the Clan Grant in 1509, though conflict with the MacDonalds continued. Despite a series of further raids the castle was strengthened, only to be largely abandoned by the middle of the 17th century. Urquhart was partially destroyed in 1692 to prevent its use by Jacobite forces, and subsequently decayed.

Another castle with lots of history and great stories. It was raided by the McDonalds', Lords of the Isles, more than once and in one raid they stripped the castle to bare walls, taking literally everything - including kitchen pots :) There was a great tour guide, very funny and very knowledgeable, too. And no, Nessie was nowhere to be seen! 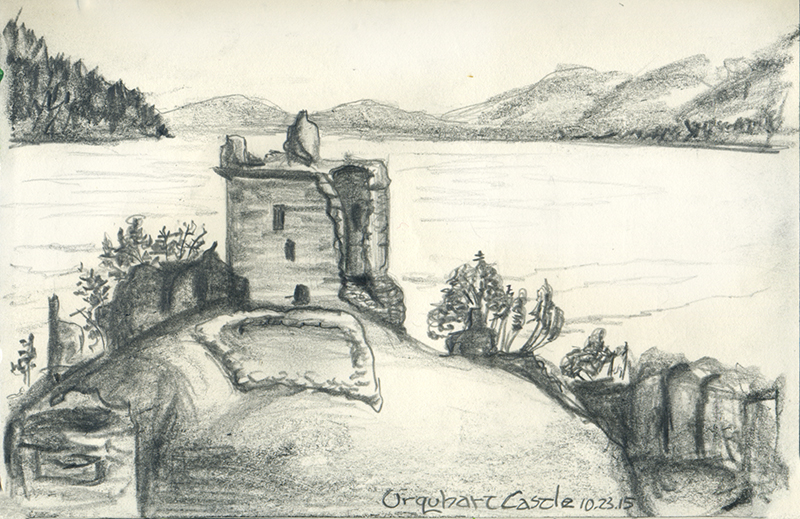 WIKI: The Basilica of Sant'Eustorgio is a church in Milan. It was for many years an important stop for pilgrims on their journey to Rome or to the Holy Land, because it was said to contain the tomb of the Three Magi or Three Kings.

Whatever $$ I saved on the ticket with two layovers, I spent on the cab drive to Milan city center from the airport. But it would have been a shame to have an 11 hour layover there and spend it all at the airport! Although I got there late at night, Milan looked like another city that never sleeps - with cafes and restaurants still open, people walking in the streets... It was raining, though, so I did not do much drawing. 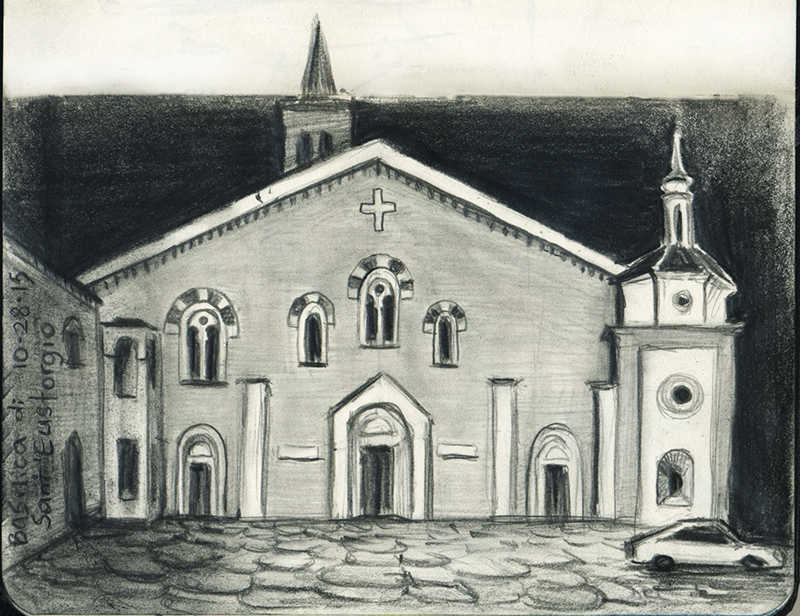 Fan art for Peter Jackson's the Lord of the Rings and the Hobbit - Hobbiton and Bag End. 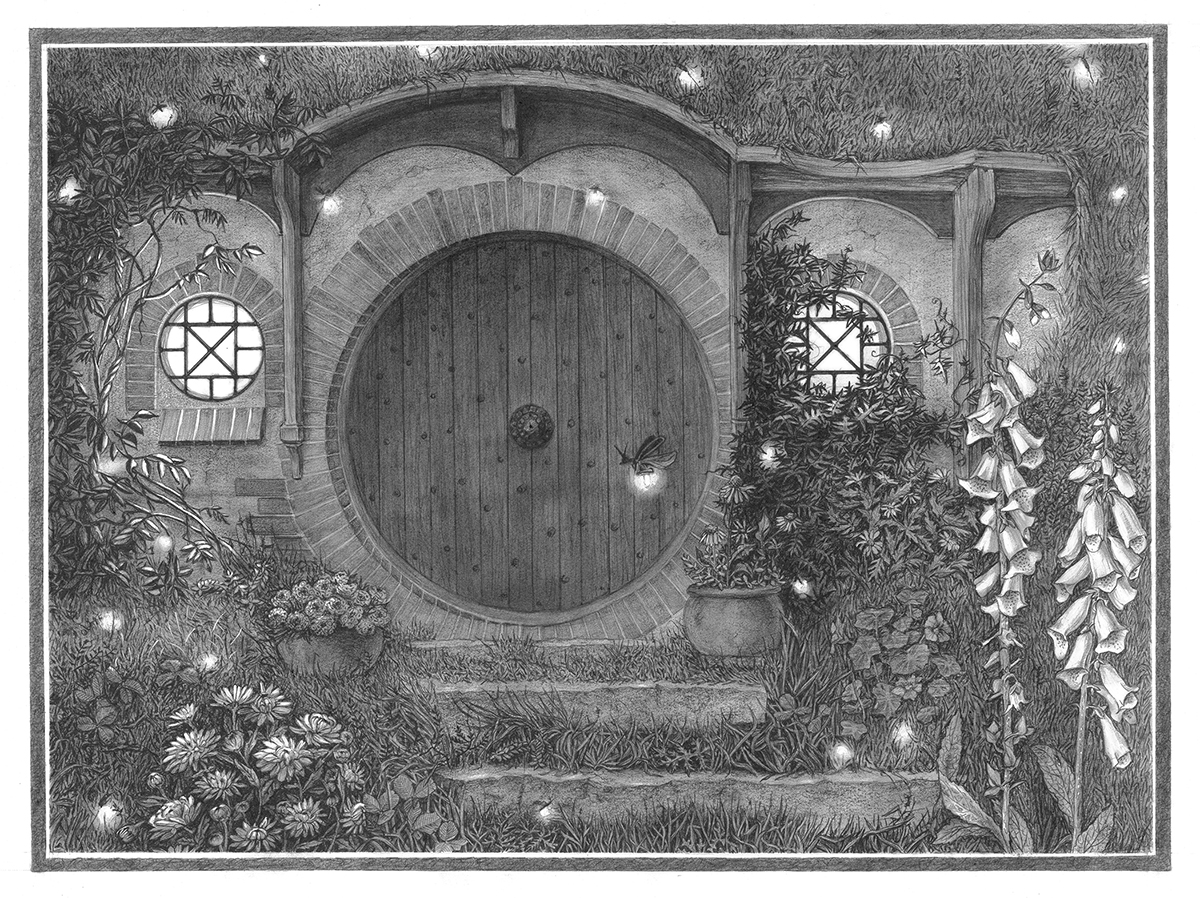 Surprisingly, one of my most popular images on Shutterstock is an outer space background that I cut out from one of my illustrations and turned into a seamless pattern. So I decided to piggyback on that and created a whole bunch of sci-fi images. They are such fun to paint!

The Endless Book project is officially over, but I am continuing on my own, as I'm nowhere near the end. Today I'm sharing what might be my most favourite double-page spread so far. Meet Fili, Kili, Bifur, Bofur Bombur and the rest of the dwarves!